About Elston Materials: Competing with the big players in concrete through specialization and efficiency 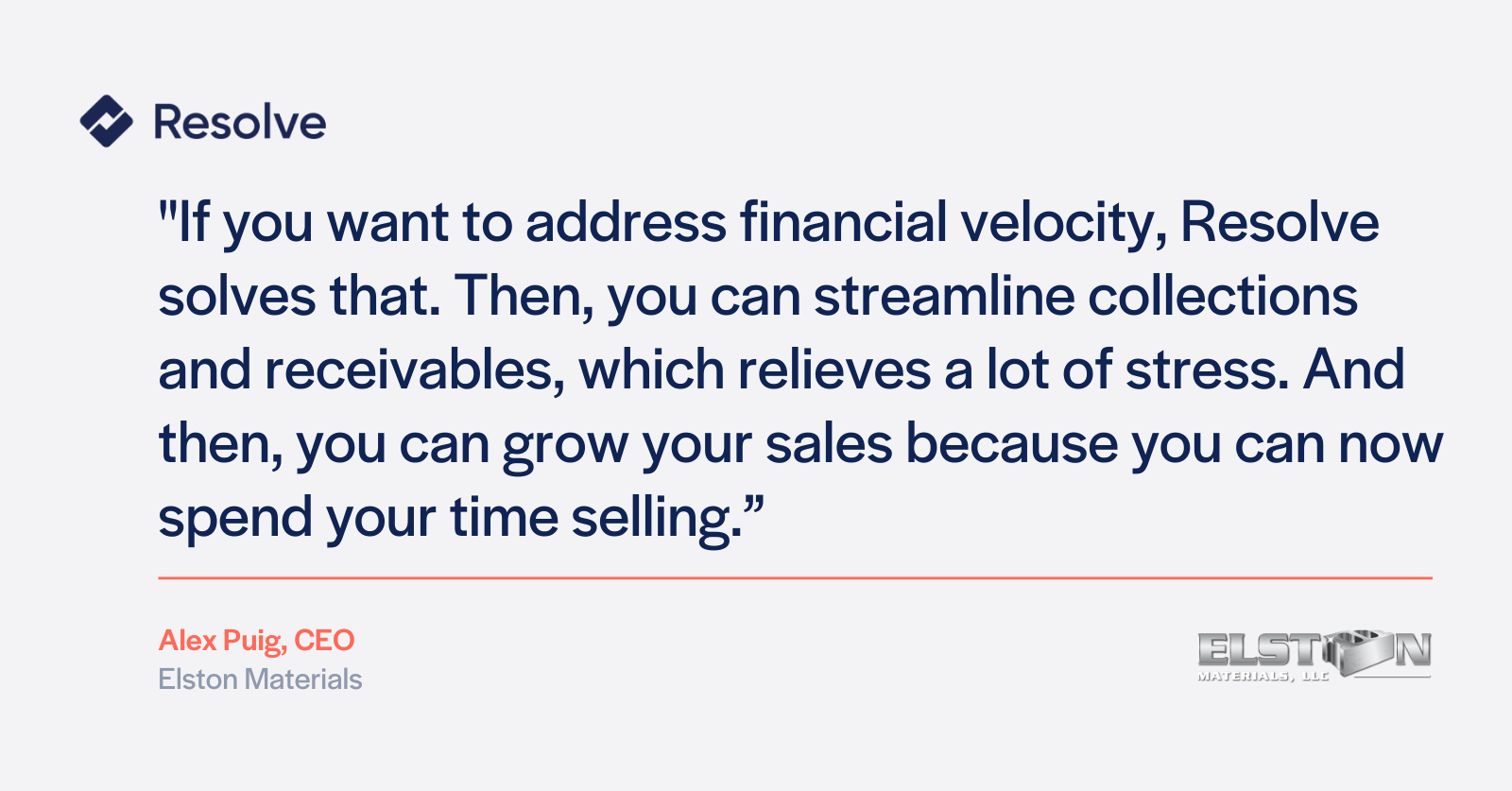 Elston Materials is a Chicago-based supplier of concrete and masonry products that has been around for more than 45 years.

During the challenges of COVID, Elston decided they were done competing with the crowded market of what they call “vanilla concrete,” which is ready-mix concrete in large quantities. To set themselves apart from the larger companies dominating the “vanilla concrete” market, they strategically identified utility contractors who needed small batches of fresh concrete as their target customers.

Elston is a company that is consistently on the lookout for digital tools and technologies to differentiate itself in the competitive concrete market. While the construction industry tends to be slow to adapt digital solutions, Elston is no stranger to B2B apps and automation. Elston’s founders, Lenny Puig and Alex Puig, are tech-savvy and eager to streamline every aspect of the business. The Elston team communicates using Slack and manages payroll with Gusto. 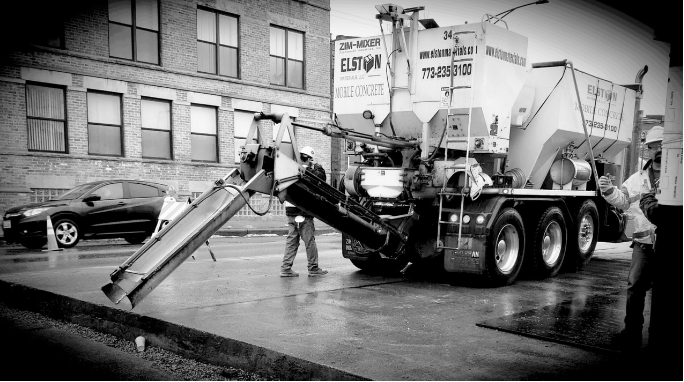 Despite working in a stable industry, concrete is also a “slow pay” industry. The majority of concrete customers are established, viable, and have a healthy credit background — the reality is, they just take an extraordinarily long time to pay, sometimes more than two months and up to 75 days. No surprise, these lengthy payment terms can strain a business. As order values grow, the pressure grows on the business to fund the costs of each sale.

Elston’s CEO, Alex, was no stranger to this industry norm. However, this also affected Elston’s ability to pay their own vendors in a timely manner, which prevented them from getting good prices on their supplies. Limits on their working capital also limited how many customers Elston could take on at any given time. Without an extra cushion to pay their vendors, Elston’s growth was limited. And it came with negative consequences. As Alex recalls, “It was stressful and not fun anymore.”

Alex was determined not to let the slow payments in his industry slow him down. In a flash of inspiration, he remembered factoring as a solution. However, Alex was wary of traditional factoring companies, based on his experience of factoring invoices in the 90’s. He started searching for alternatives.

Alex is familiar with disruption — it’s what he’s been doing in the Chicago concrete industry. “I was worried because factoring has such a negative connotation. I visited one website and the next day, I must have received almost 50-60 phone calls a day from factoring companies. I decided to search for alternatives to factoring and that’s when I found Resolve.” 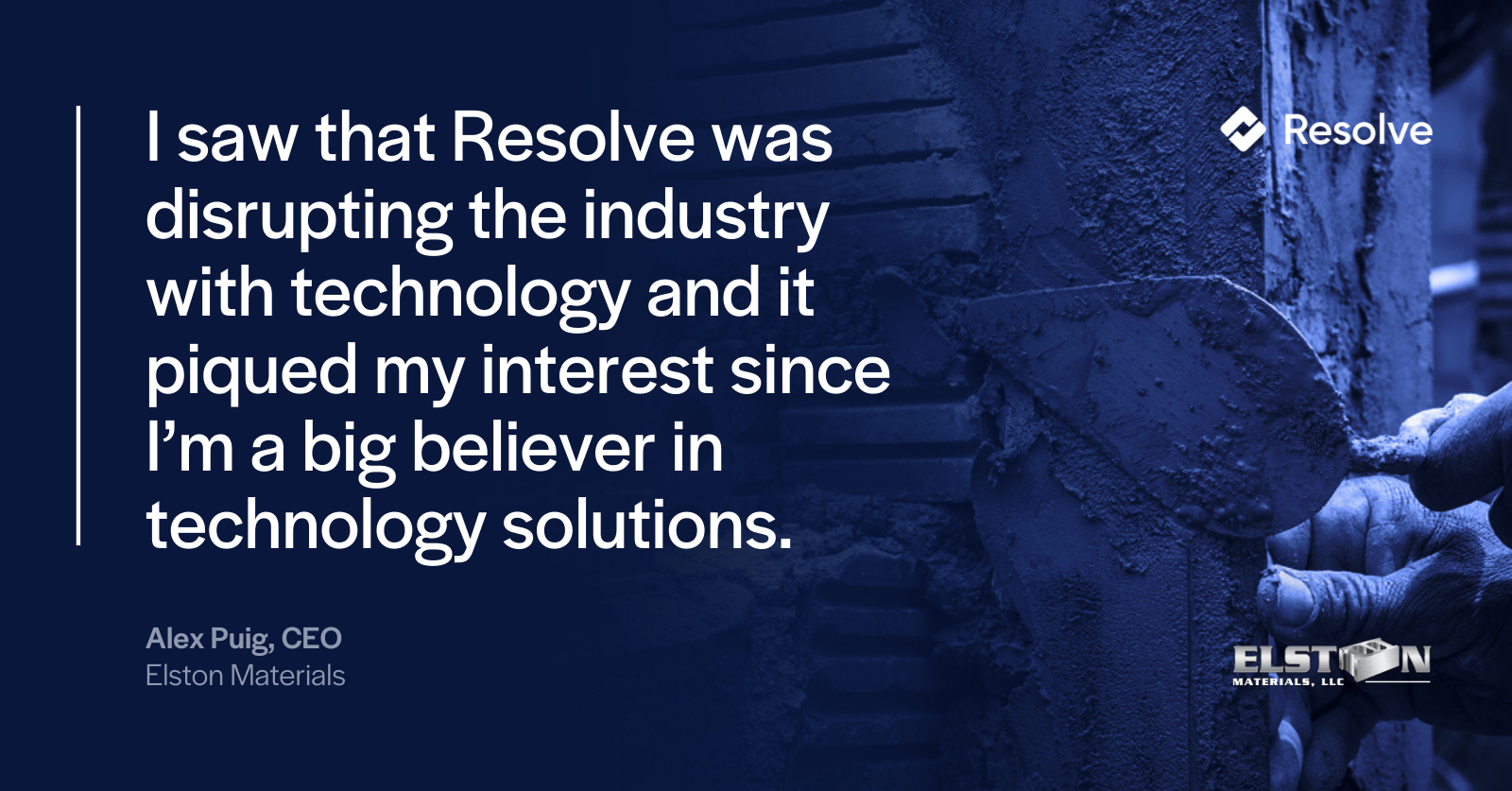 From no process to streamlined accounts receivables

Before working with Resolve, Elston had no existing process for accounts receivable and invoicing. “The process was outdated and ancient” remembers Alex. He would spend hours on the phone with his CFO at Ignite Spot at the end of a given month, reviewing who had paid, who hadn’t, and chasing updates.

“Stuff would slip through the cracks. It was a bit of a nightmare” remembers Alex.

While Elston initially engaged with Resolve to improve their financial velocity from a slow-paying industry, they were also able to implement a streamlined accounts receivable and collections process. 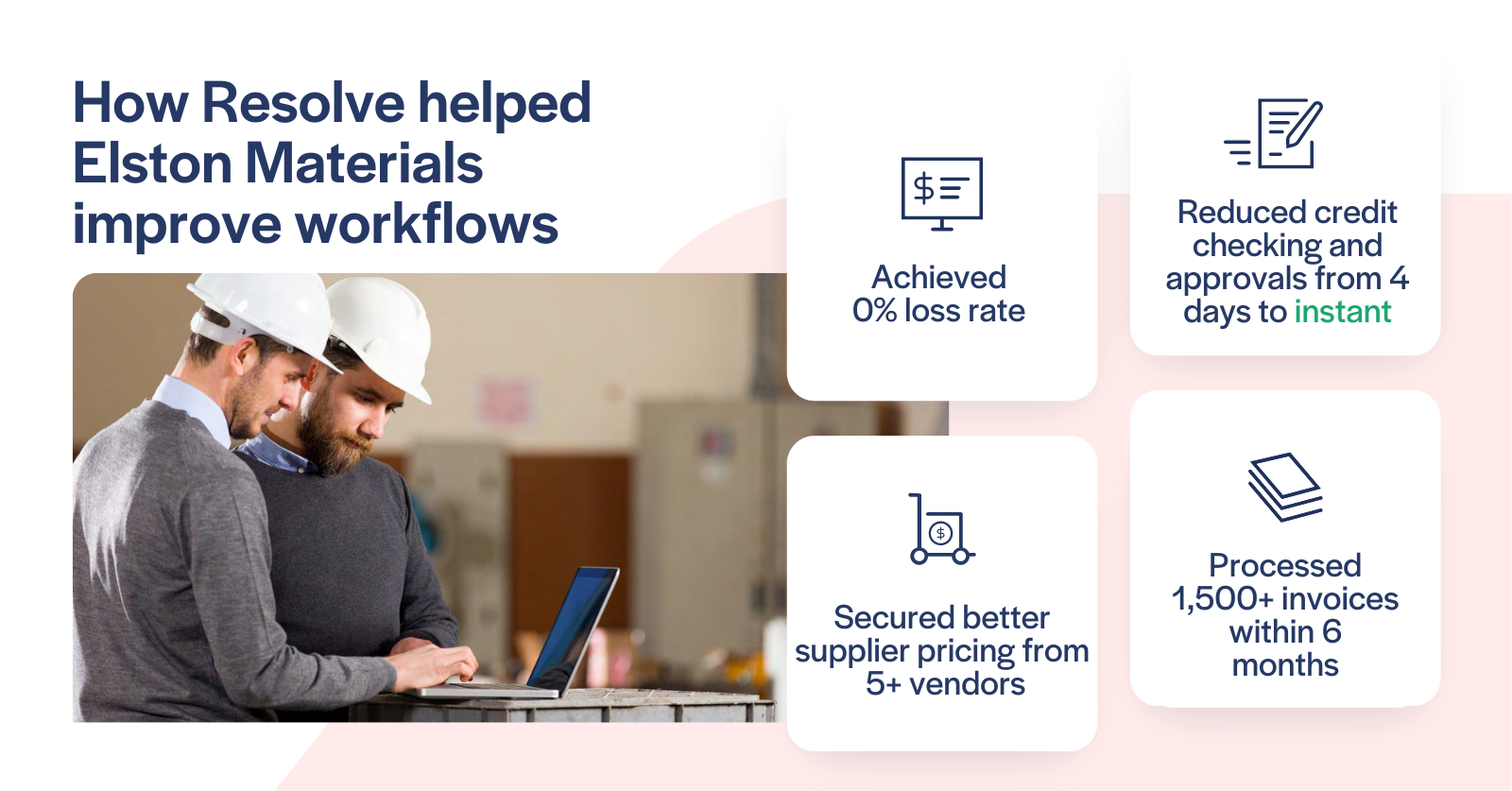 Using Resolve, they were able to automate and outsource all of their net terms management tasks, including:

Alex’s previous experience with factoring also made him nervous about explaining the switchover to customers. He didn’t want his customer to lose confidence in Elston. Luckily, Resolve’s “gray label” branded experience made it easier than expected to transition customers to billing with Resolve. Unlike factoring companies that invoice customers directly, Alex was able to send co-branded invoices from Elston Materials with “powered by Resolve” discreetly placed on the invoice. 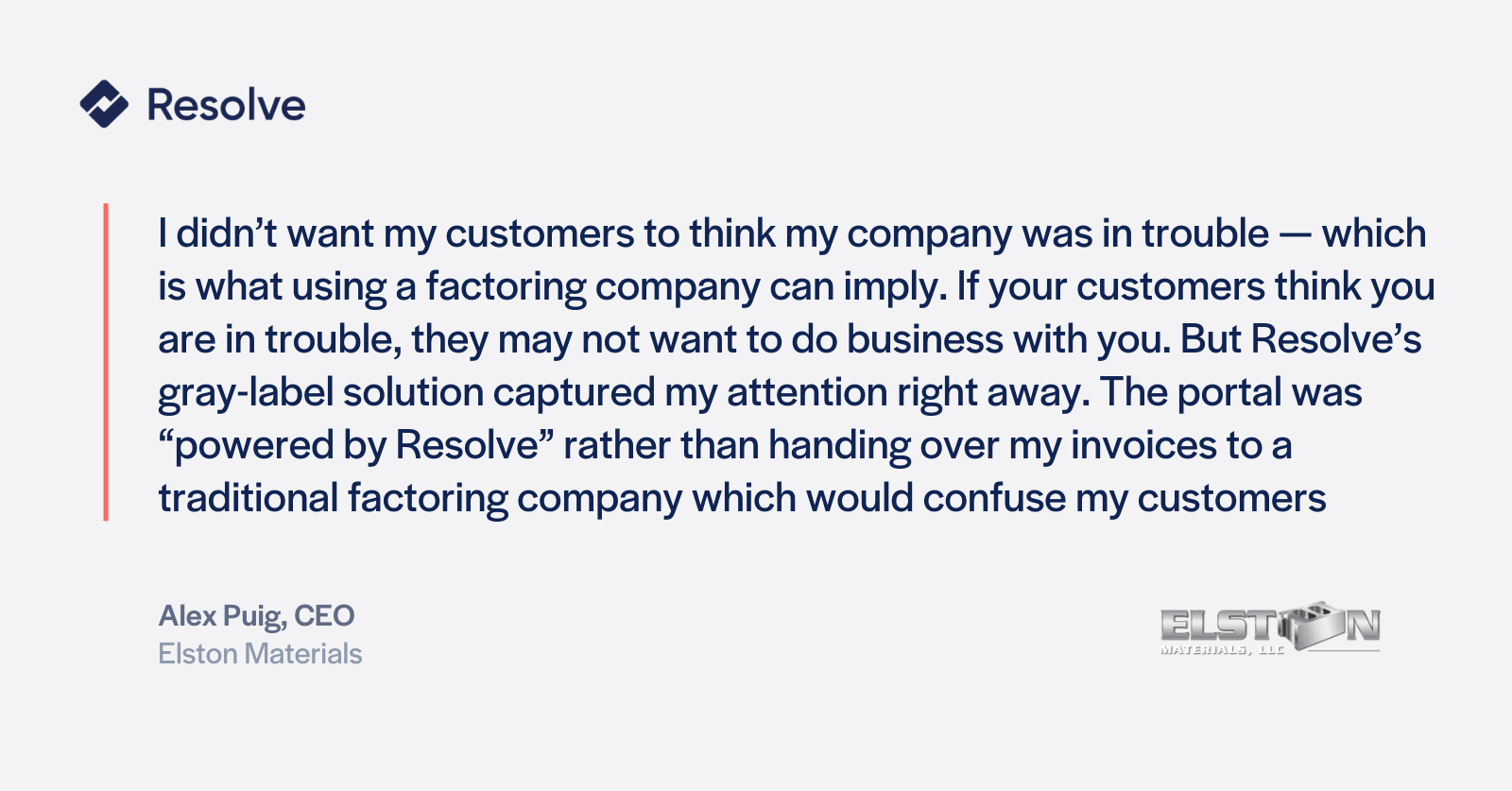 Doubling their business with one large customer

After implementing credit checks and accounts receivable processes with Resolve, Elston signed a larger customer (which would have strained cash flow in the past, due to the cost of materials), and was able to give them a $50,000 credit limit. The credit check from Resolve revealed a solid history, and they were approved for $75,000. Now, they’re in talks of increasing the limit to $100,000, which would double their business with this customer. And because of their positive experience working with Elston, the customer wants to transition all of their concrete purchases to Elston.

Through better pricing, Elston has been able to increase margins by 5%, from 25% to 30%. 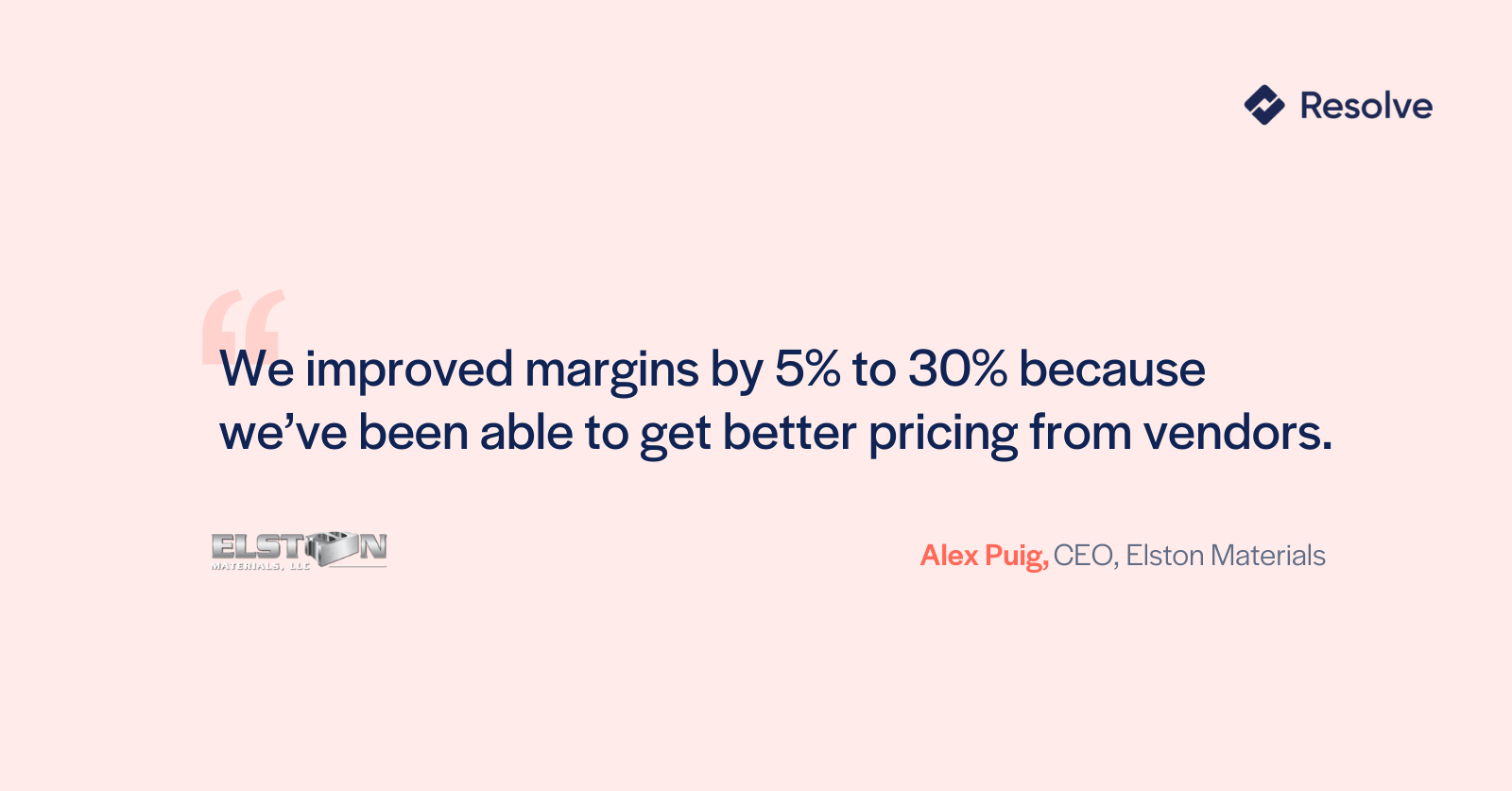 Credit checks in hours (not days), and more control of each sale

Credit checks used to take up to four days. Now, they take just a few hours. Instead of waiting days for a paper application (and often forgetting to follow up—they have a lot on their plate!), Elston is able to send a simple link, and a customer knows their credit limit within a few hours, which moves the sale along much faster.

Because invoicing and collections are no longer slipping through the cracks, Elston is able to be proactive about sales and collections. “Resolve changed the business. We can actually put customers on hold.” Instead of searching for invoices, the Elston team has full visibility into their customer sales and invoices through a dashboard and they are able to easily point to a customer’s portal and see the steps that need to be taken on and off from hold. 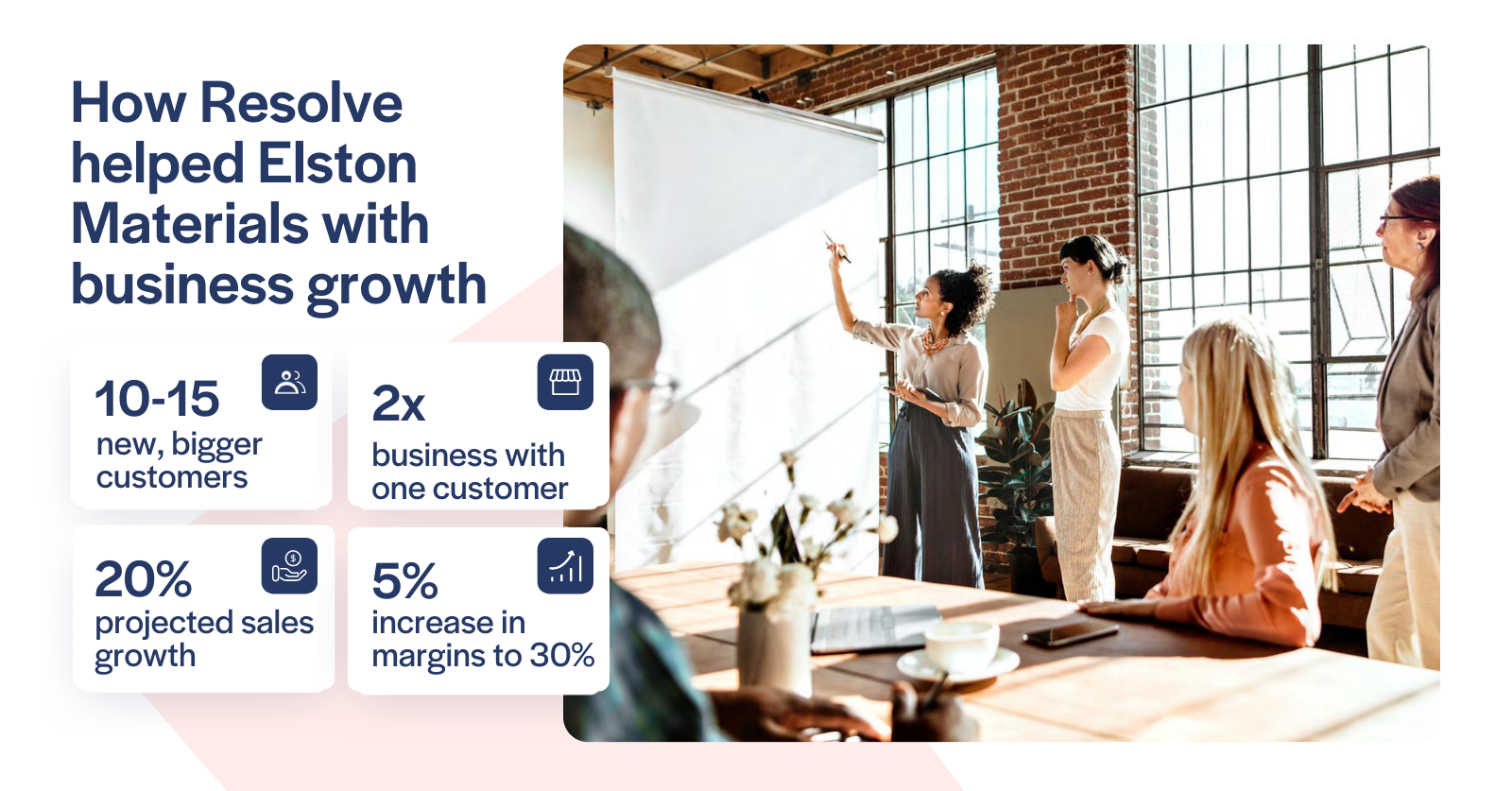 Since streamlining their accounts receivable process, Elston has gained at least 10 new customers because they’re able to offer sustainable net terms and carry the costs. Alex explains, “We’re adding new customers to the portal every week. We can now take a few larger customers because if I have to pay my cement bill, the percentage that we receive upfront covers a lot of my supplier costs.”

Motivation at Elston Materials is through the roof. When the team knows they’ll see money within 24 hours of making a sale (thanks to receiving an advance from Resolve), it’s easy for the entire team to get excited about closing new deals.

One of the best benefits of improved financial velocity? Actually enjoying the business. Far from the pain of stress he felt when things felt tight, Alex is now actually excited about sales. Before Resolve, he did not attend any sales calls due to a lack of time. Now, “I attend sales calls once or twice a week with my sales team and we land the customer pretty much every time I attend.” 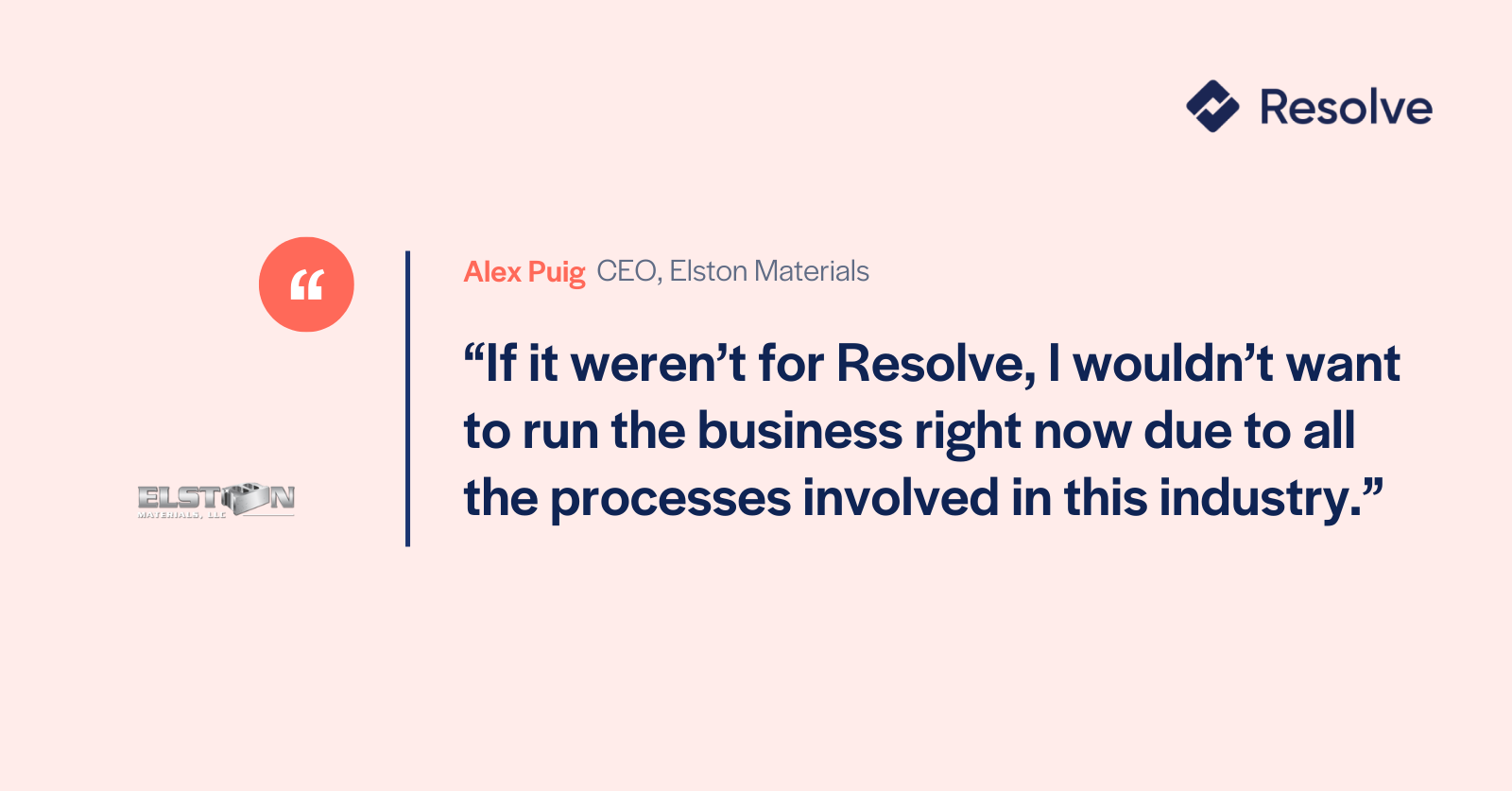 The team at Elston now feels stable and no longer on the knife’s edge with the help of Resolve (one of their team members is now so excited about work, she even brings her computer on vacation at her own discretion). This frees them up to get excited about sales and bring in new customers — which translates directly to revenue growth. Alex projects a 20% increase in revenue this year, from $10 million to $12 million.

Elston is now able to work on bigger contracts than before. They’re currently in talks with contractors working on the tollway about specialty concrete where Elston is able to charge five times more than a typical project. The excitement is felt around the company and as Alex says, “[Resolve] is going to be a game-changer for us.” 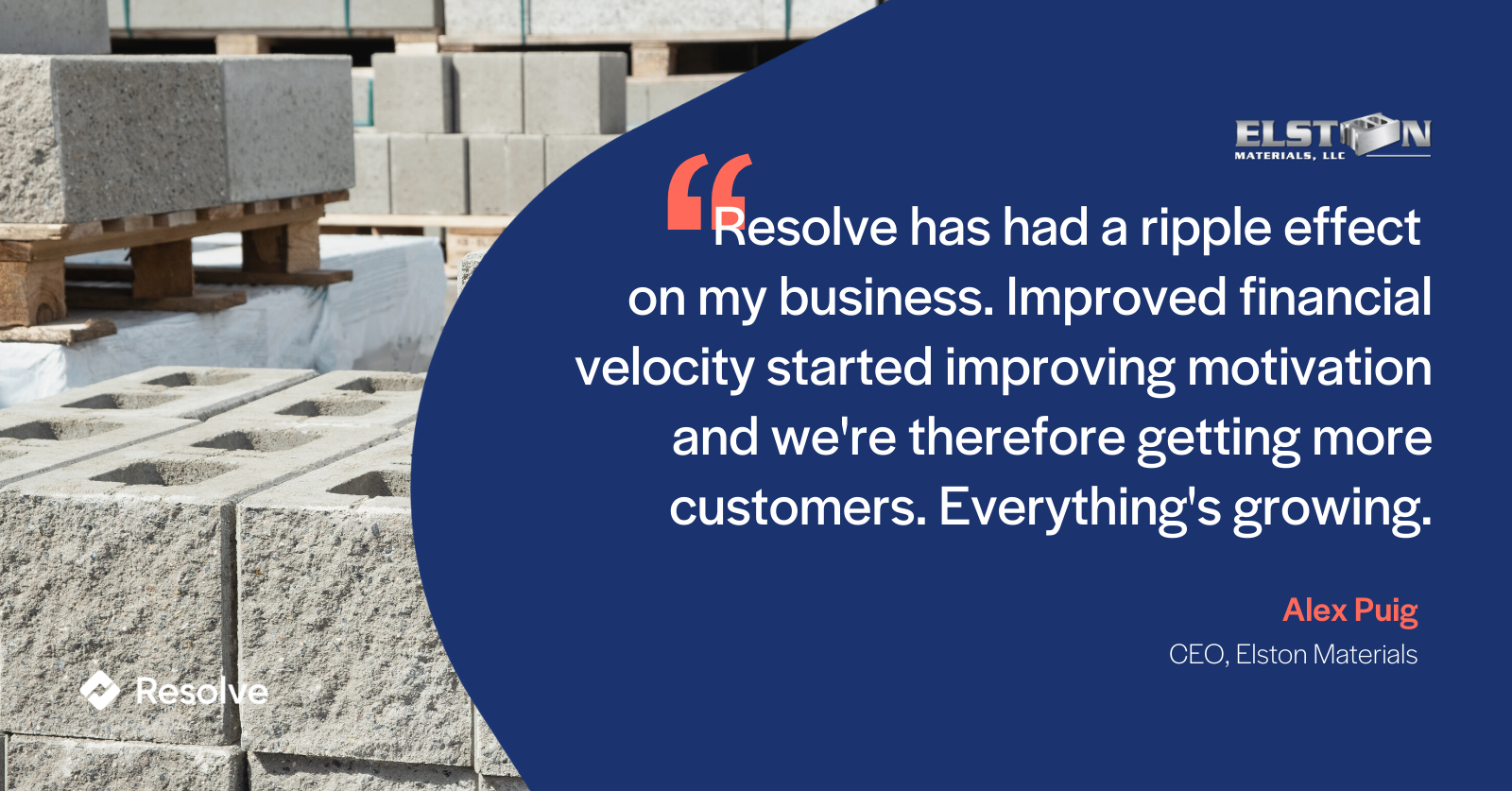 Outsource your credit checks and accounts receivable — so you can get excited about building the business again. Learn more about Resolve and book a demo.

This post is to be used for informational purposes only and does not constitute formal legal, business, or tax advice. Each person should consult his or her own attorney, business advisor, or tax advisor with respect to matters referenced in this post. Resolve assumes no liability for actions taken in reliance upon the information contained herein.

How a Supplier Eased AR Pains While Enhancing Customer Relationships

Better than Bill.com: Navigating Price Surges with a QBO Integration

How Archipelago Tripled Their Revenue Through Resolve